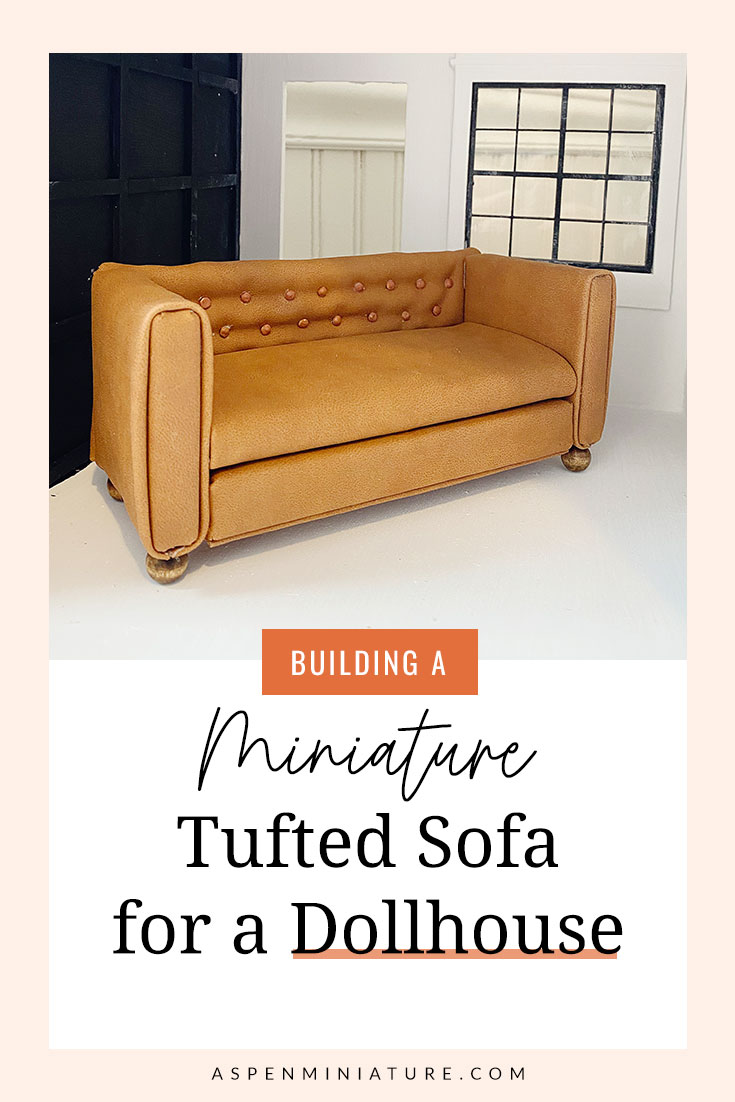 How To Build a Miniature Tufted Sofa

Yes, I will explain how to build a miniature tufted sofa, but this isn’t really a tutorial. It’s more so a lesson in what I did with creating my first miniature furniture piece and what I learned from my experience. Please take what you will from it.

Pinterest is a gem when it comes to finding and sourcing ideas for dollhouse furniture.

I knew that the room I wanted to create was more of a modern boho meets Anthropologie style. If that’s even a thing?

I immediately knew I wanted a tufted leather sofa in a hazelnut/saddle leather color. 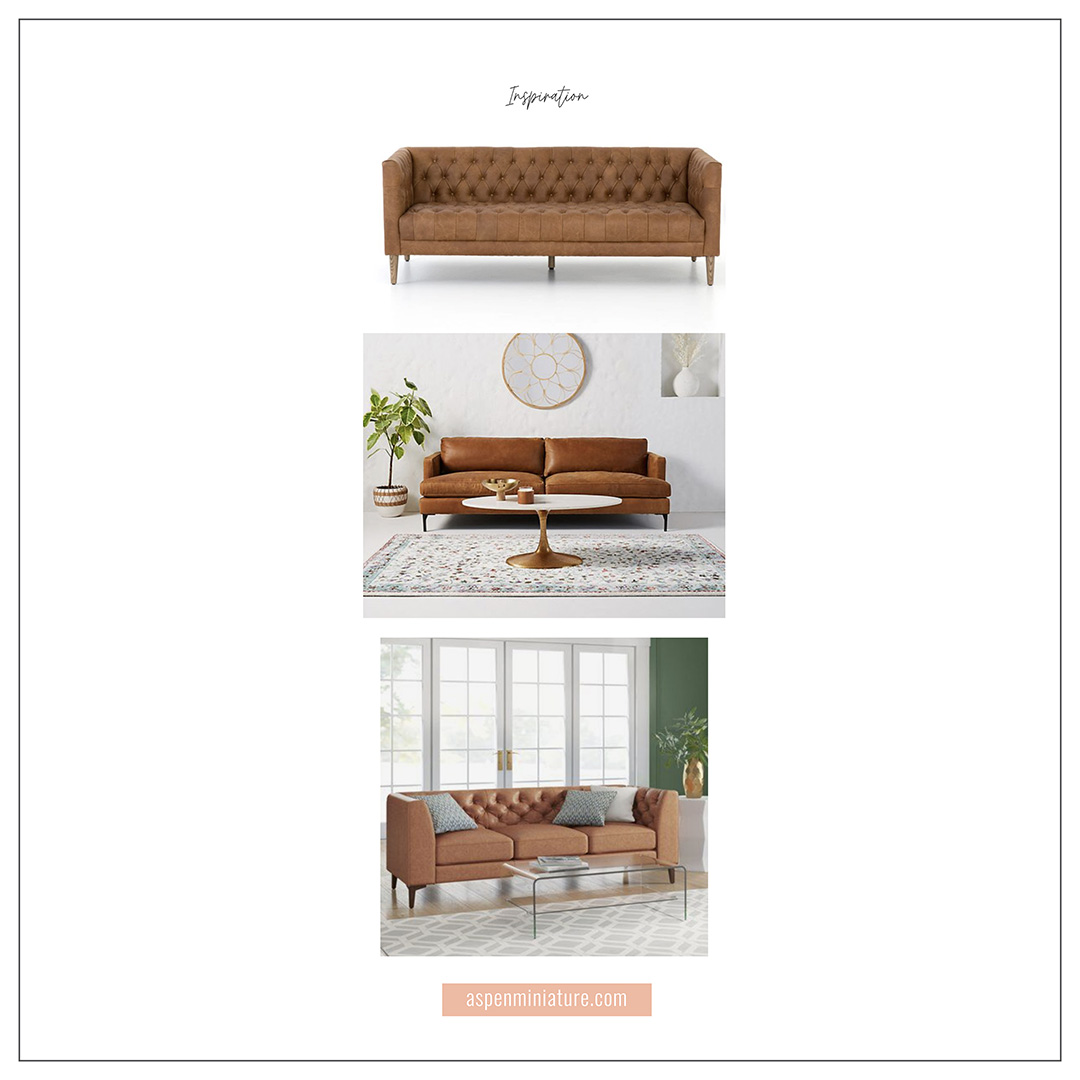 I purchased some faux leather sheets on Etsy. Five of them to be exact. Oh boy, am I glad I did! I used up a lot since I had no clue what I was doing!

I’m a graphic designer; Adobe Illustrator is my go-to design software and naturally what I decided to use for this sofa.

I started first figuring out what wood I was going to use.

I chose a 2 mm Basswood* that I would cut out with my laser cutter. Taking that 2 mm into consideration, I started drawing out the plans. This is what I came up with after building out each part that I would cut. 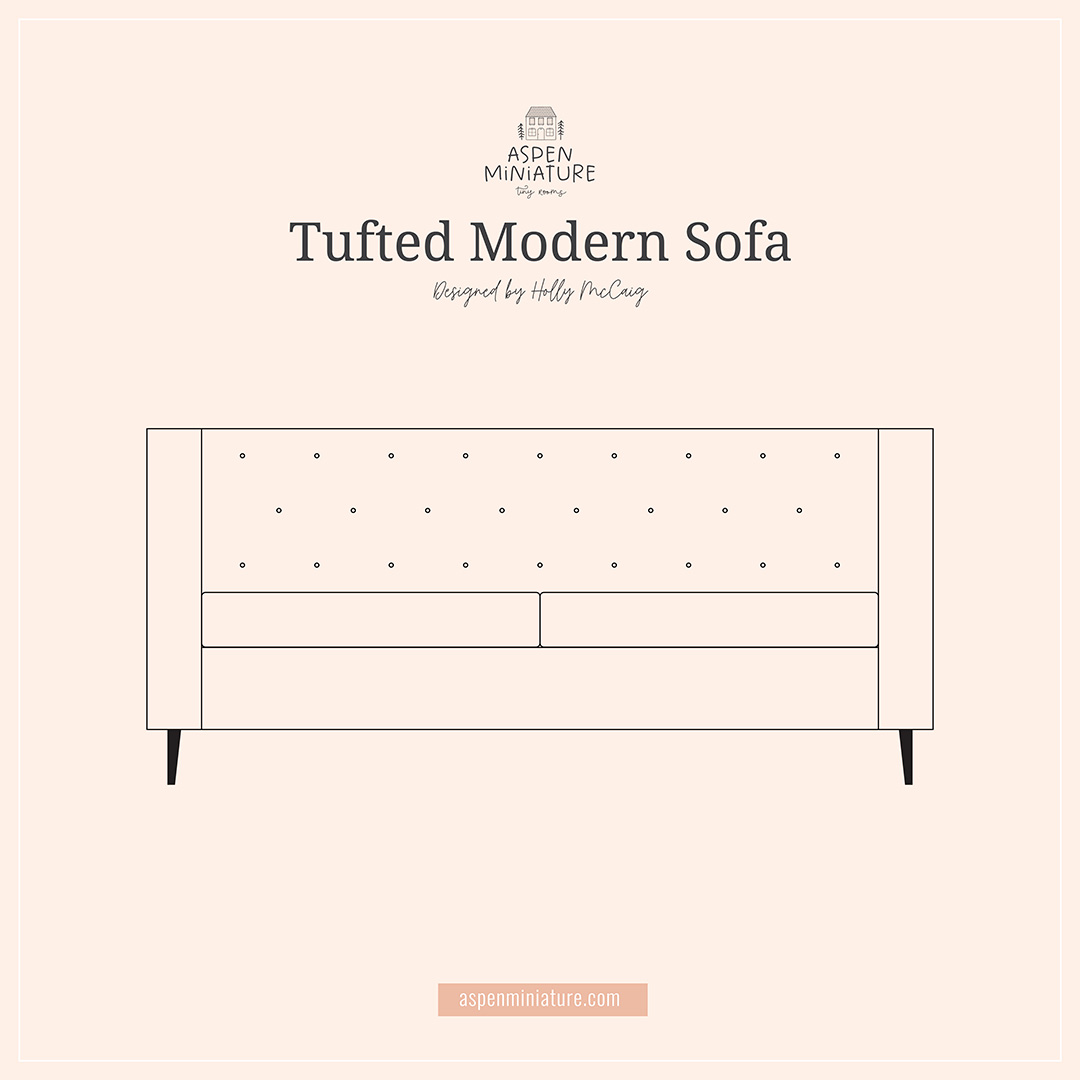 I own a Glowforge and have for about four years now. It’s been part of my regular business for some time. So naturally, I love the idea of cutting dollhouse furniture from it, like my room box. I can be more precise with my measurements. 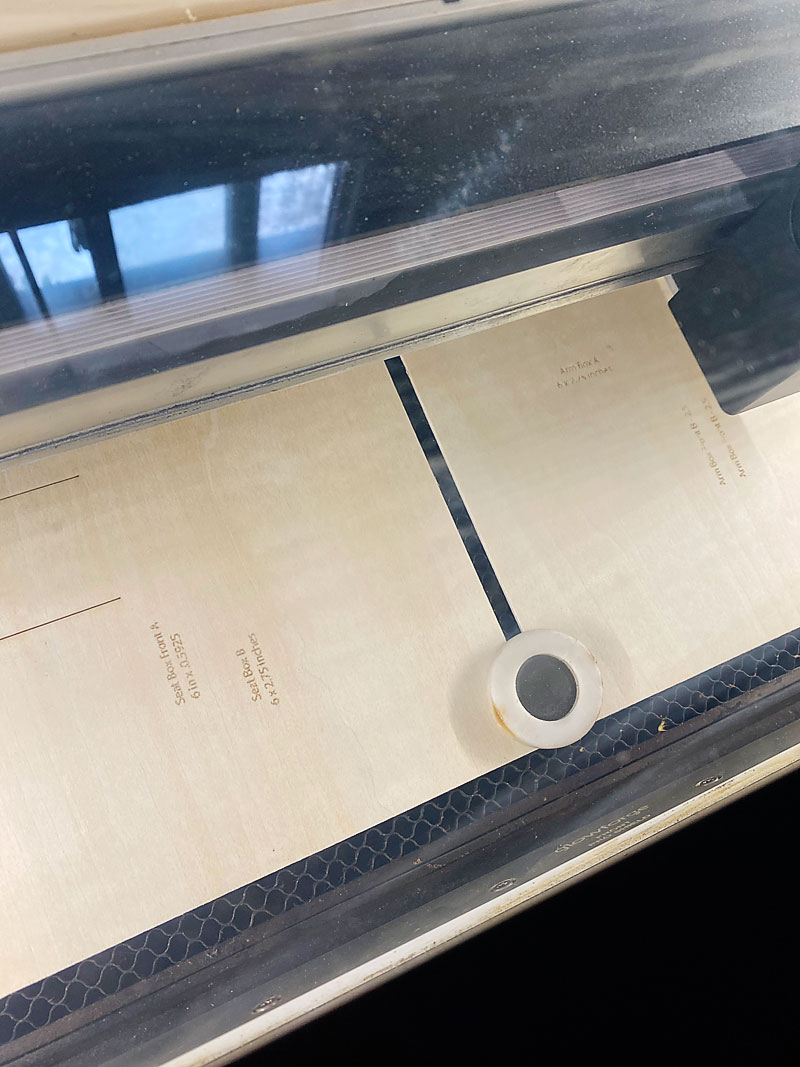 Then I started building the parts. I was smart enough to label my pieces and engraved them as I cut them on the laser cutter. With something you’re going to cover with fabric, this isn’t a bad idea! 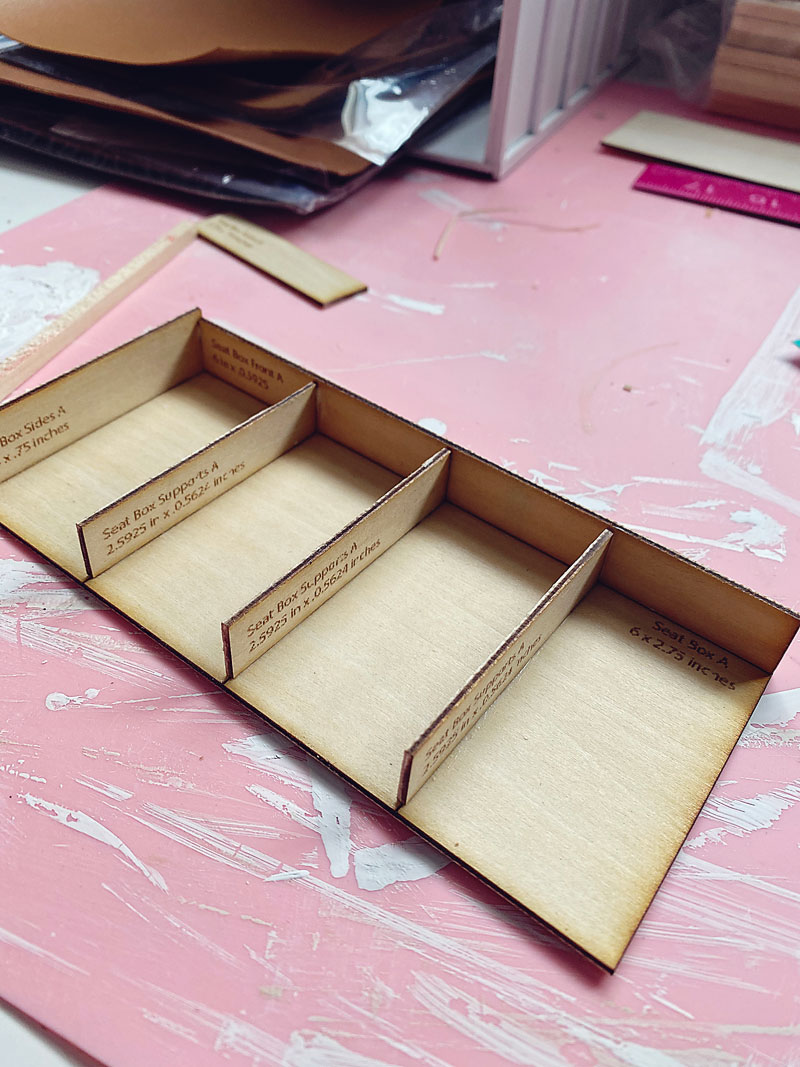 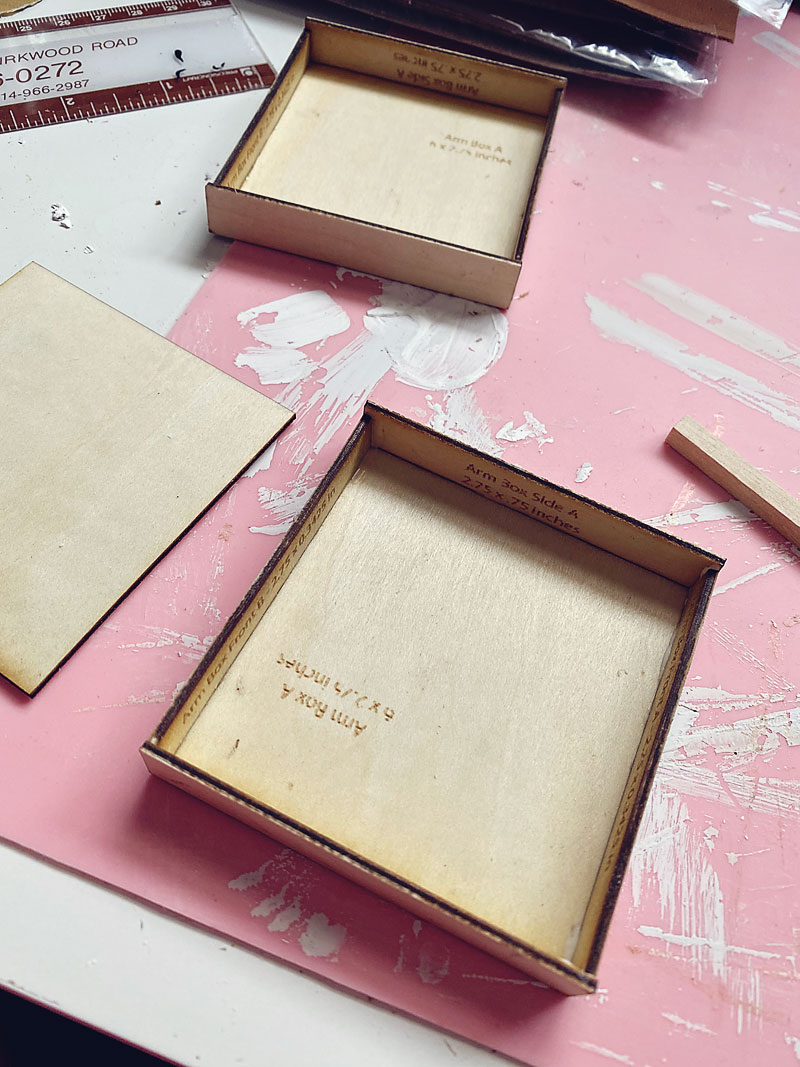 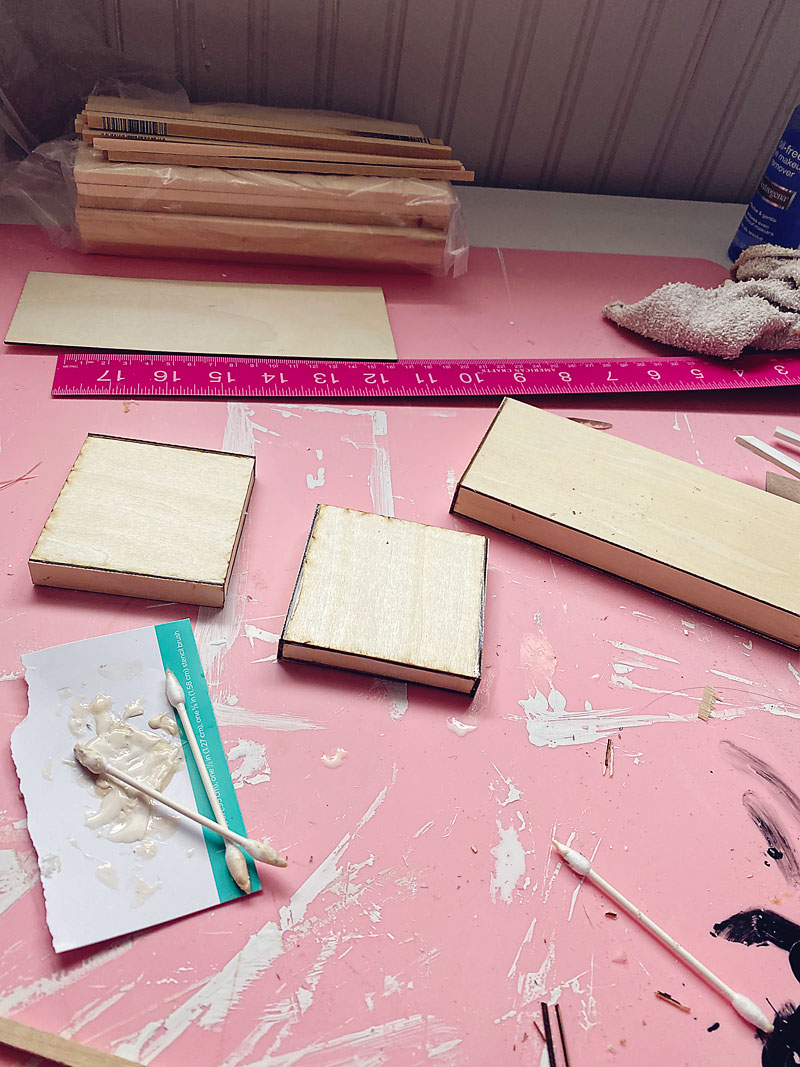 When I started to cover my pieces, I ran into a problem with gluing things down.

I had followed other tutorials where people used wood glue to do this. But most were gluing down fabric and not faux leather. Getting it to stick to anything was a challenge. 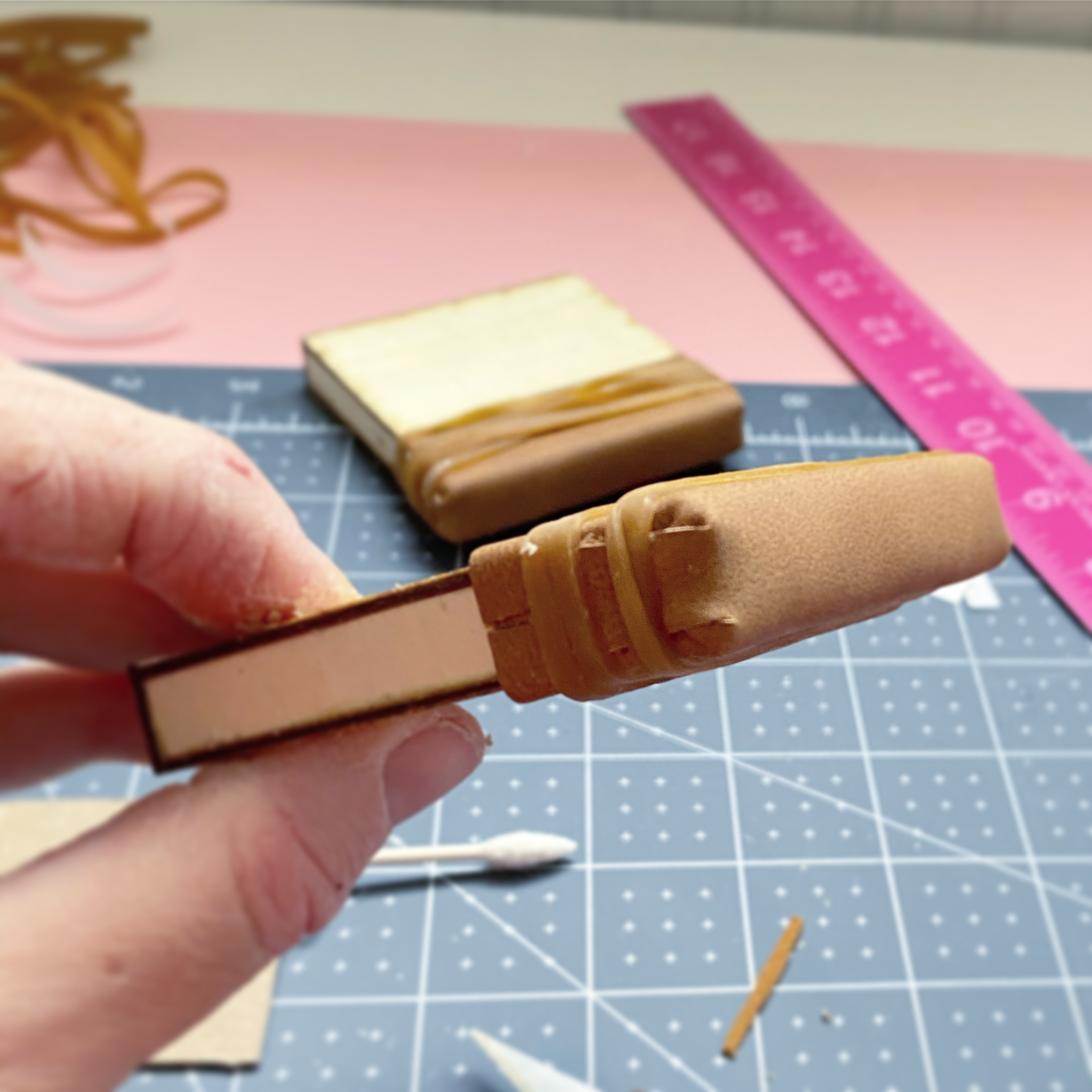 Rubber bands helped, but no dice.

So I decided to stop and move on to the back where I would have to tuft it.

Then I realized my thread for tufting wasn’t strong enough for the tufting process. So I ordered some embroidery floss and bigger needles.

I waited a week and then reworked the back with holes and cut it out on the laser cutter. 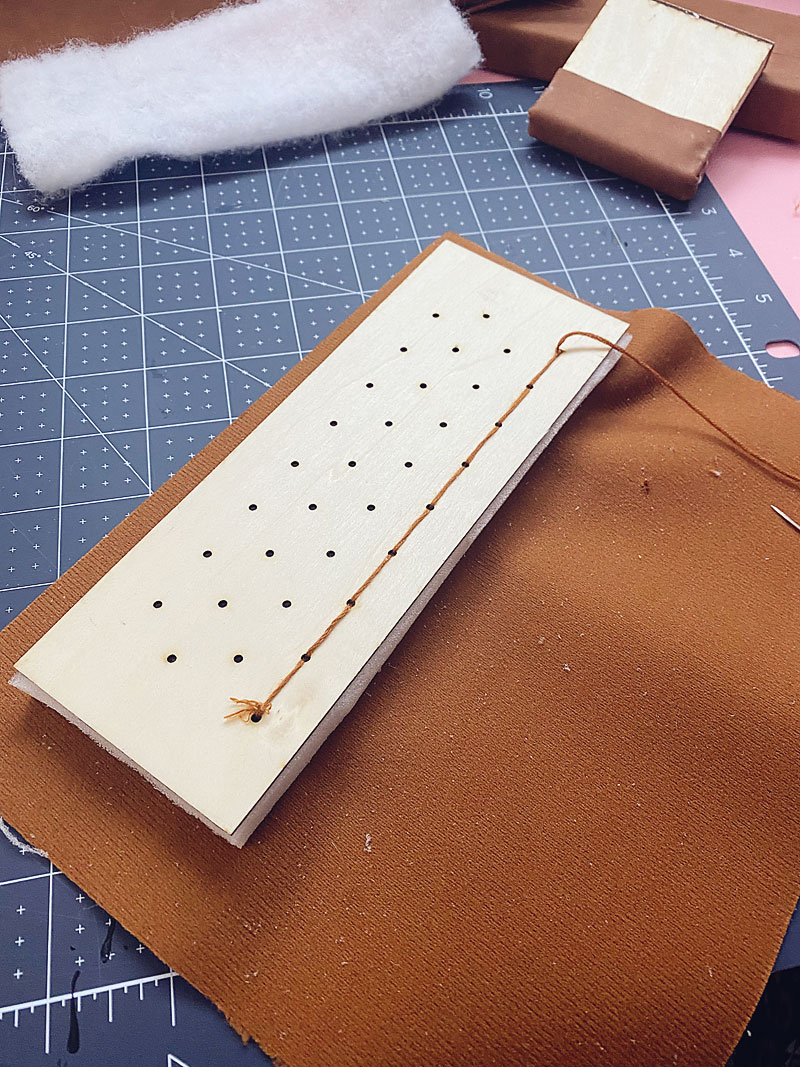 I used a 1/2 foam I bought on Amazon* because the batting I had wasn’t giving me enough tufting. This worked out so much better@! 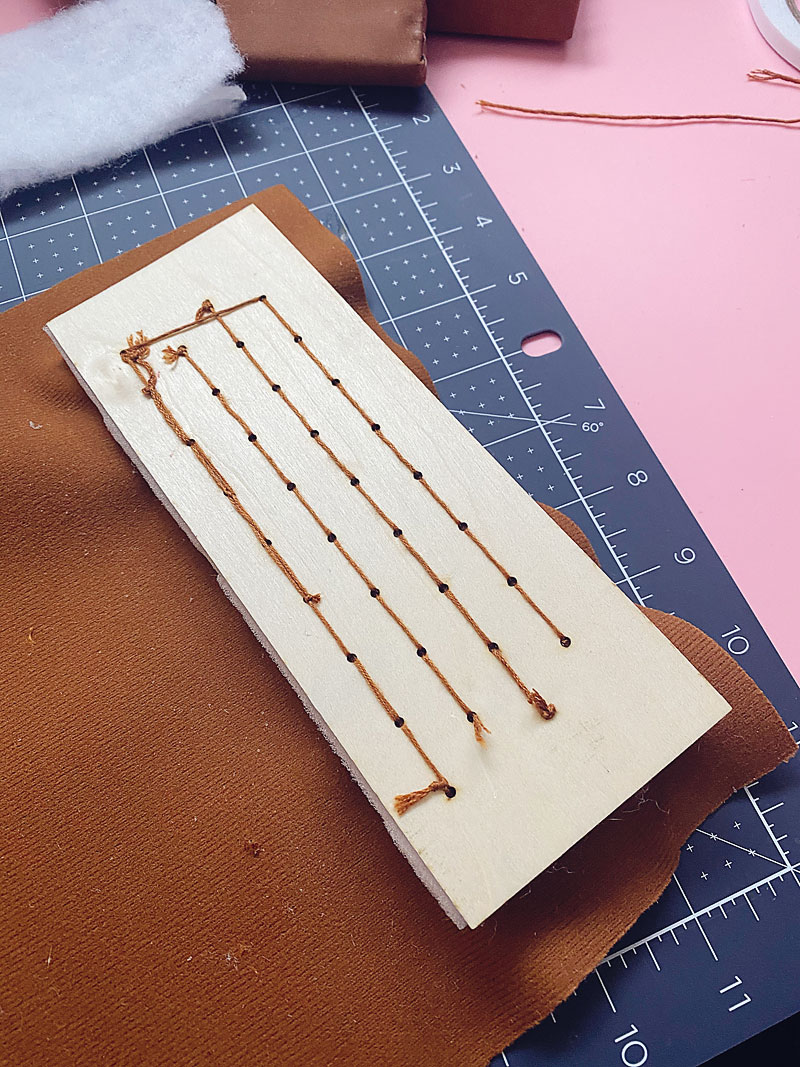 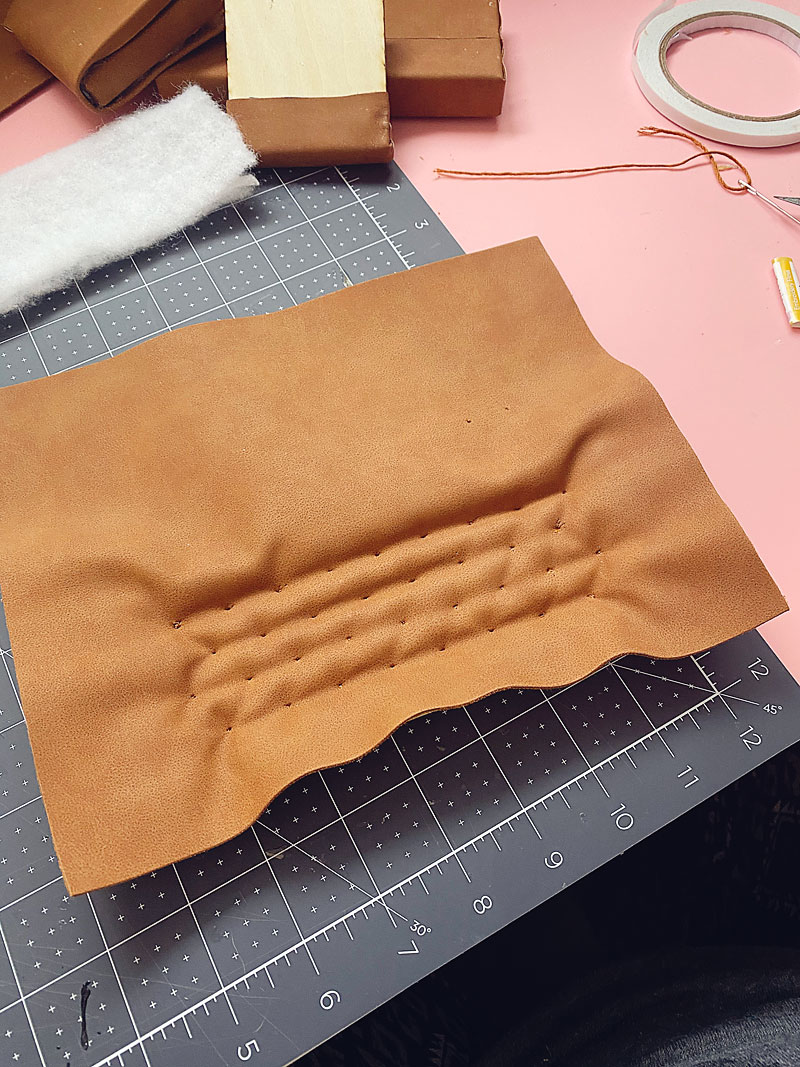 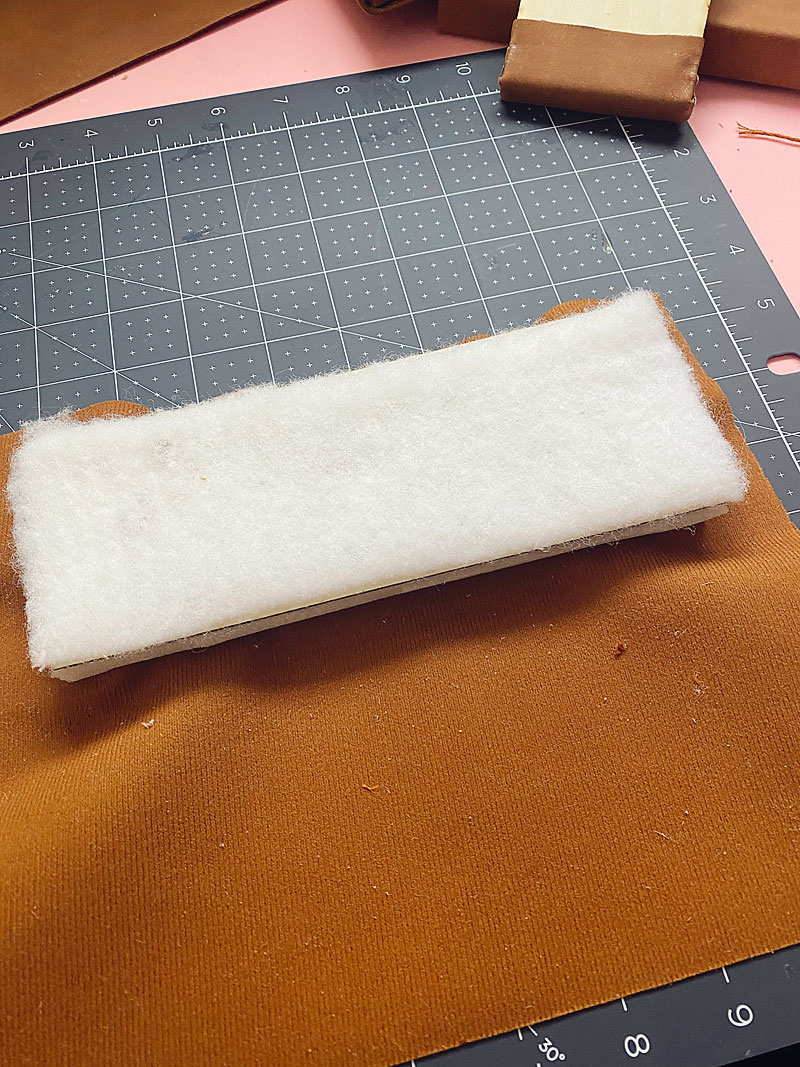 I just pulled the thread through and tightened it and did this row by row. Then I added a little bit of batting on the back to help cover up the knots so they wouldn’t show through the leather.

I don’t know why I did four rows because when you add on the seat cushion it covers up two of them.

My biggest issue with wrapping leather vs. fabric was getting it to lay flat and have clean corners. So I didn’t finish it off as nicely as I would have liked.

I tried using a glue gun, and that worked for some things. But in the end, the Gorilla Super Glue I found was a little better.

I tried scraping off the glue, but it left some messy parts where my tests didn’t work, and I have to live with those.

Putting The Minature Tufted Sofa Together 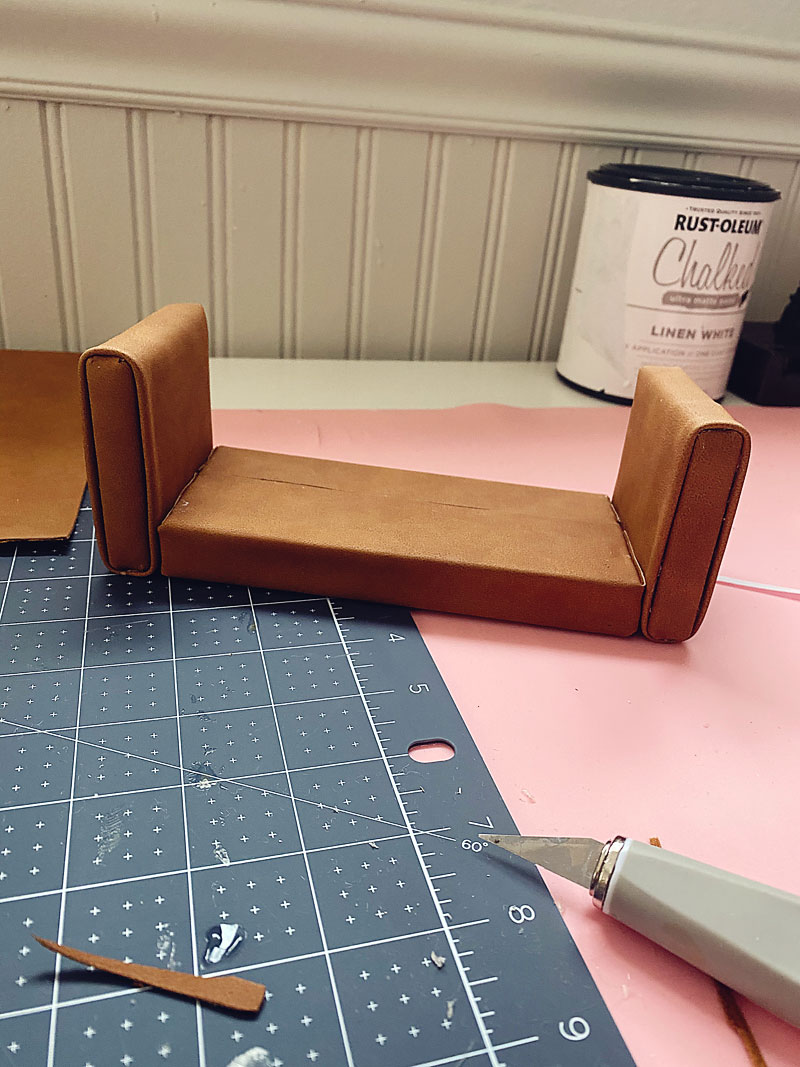 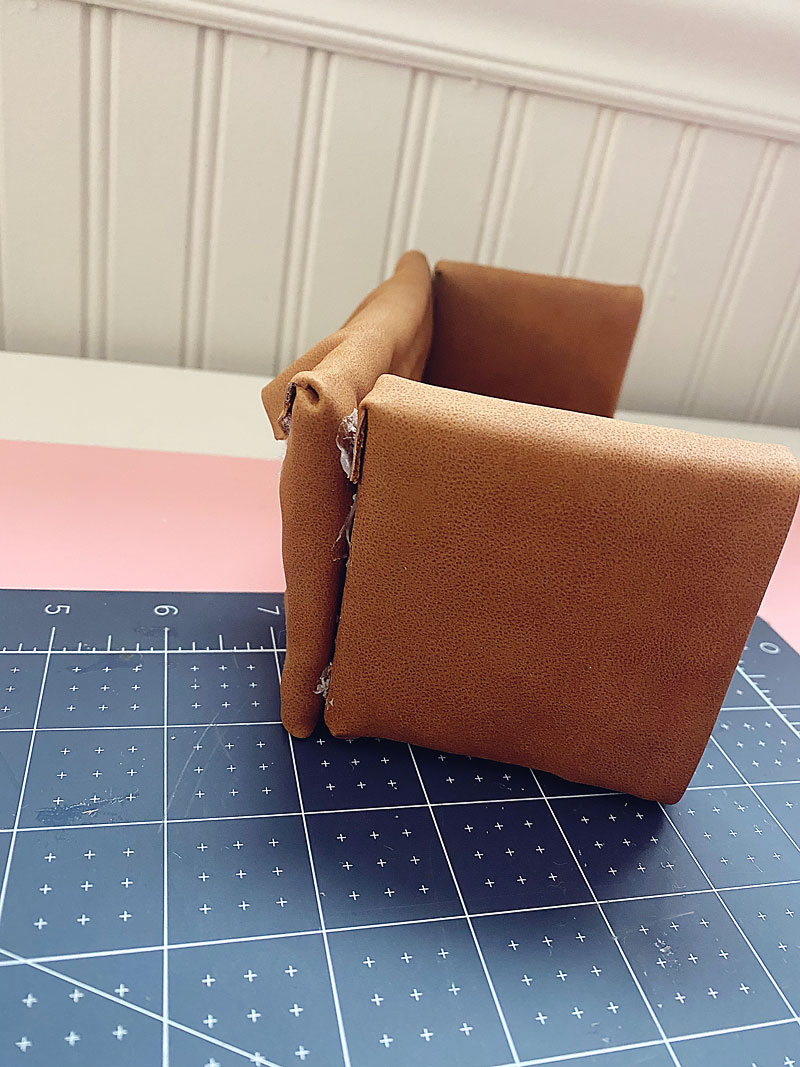 Here is where I used hot glue, and it just would not stick and hold a tight seal from the back to the arms. I messed up one side pretty bad scraping of it off, but we’ll just put a throw blanket on it. Super glue ended up bonding it nicely.

Because the leather got bulky, I tried to butt things together as I wrapped them rather than overlapping them. I just gave up not the bottom. LOL 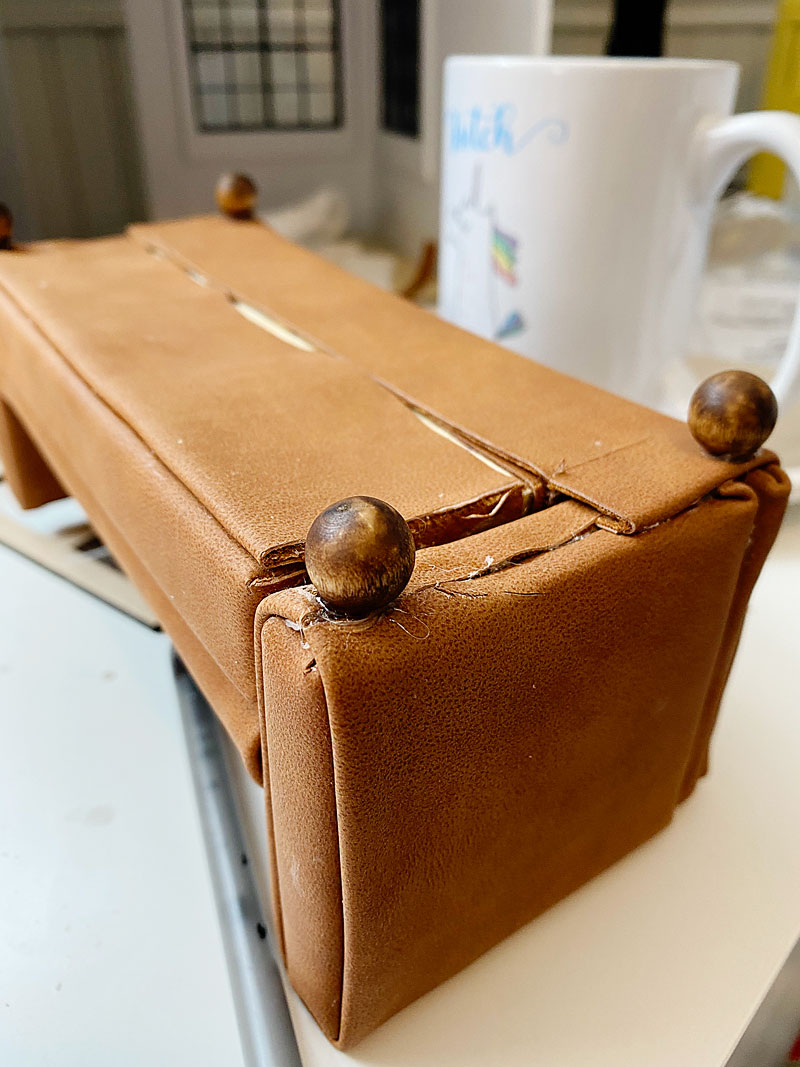 I figure as long as it looks good from the front I’m fine. I stained some wooden beads and glued them on. I love my little stain pen! 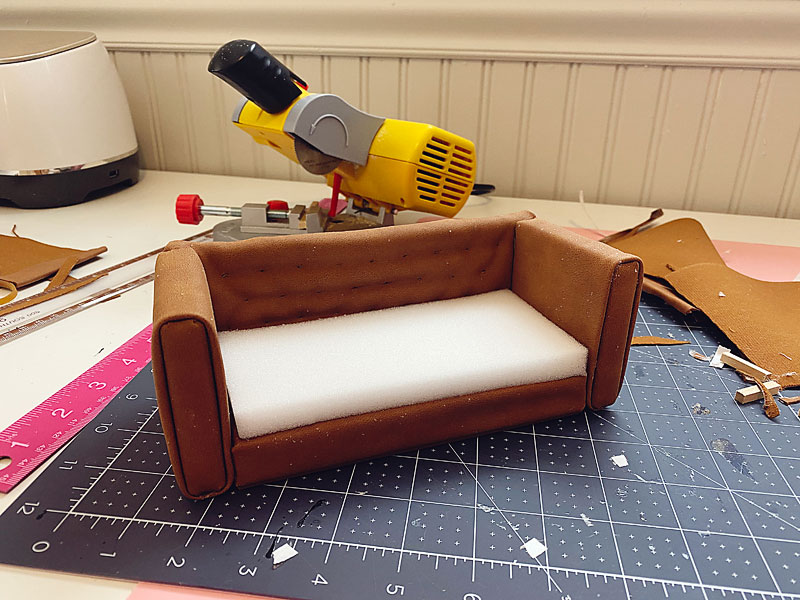 Next, I cut a piece of foam for the cushion. Adding the leather and trying to get clean corners was impossible. So my secret is that I folded the sides in and wrapped it around the cushion. The sides have nothing on them. It’s glued down to the bottom. 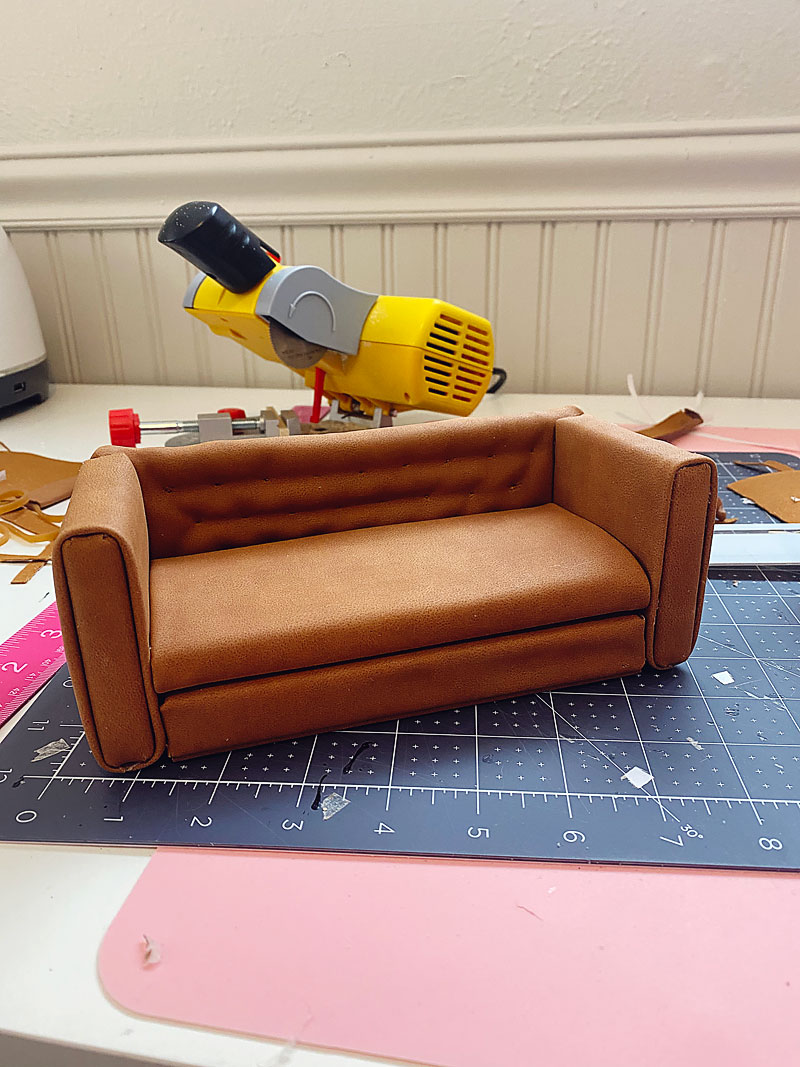 After looking at it I knew it needed buttons but where would I find the perfect match?

I made them. I rolled out some polymer clay, mixed up some paint, and glued them down. I kind of wish I had made them smaller though.

I ran a little more paint over them for a bit better coverage and realized I got glue on the leather.

Do you see my eyes rolling? 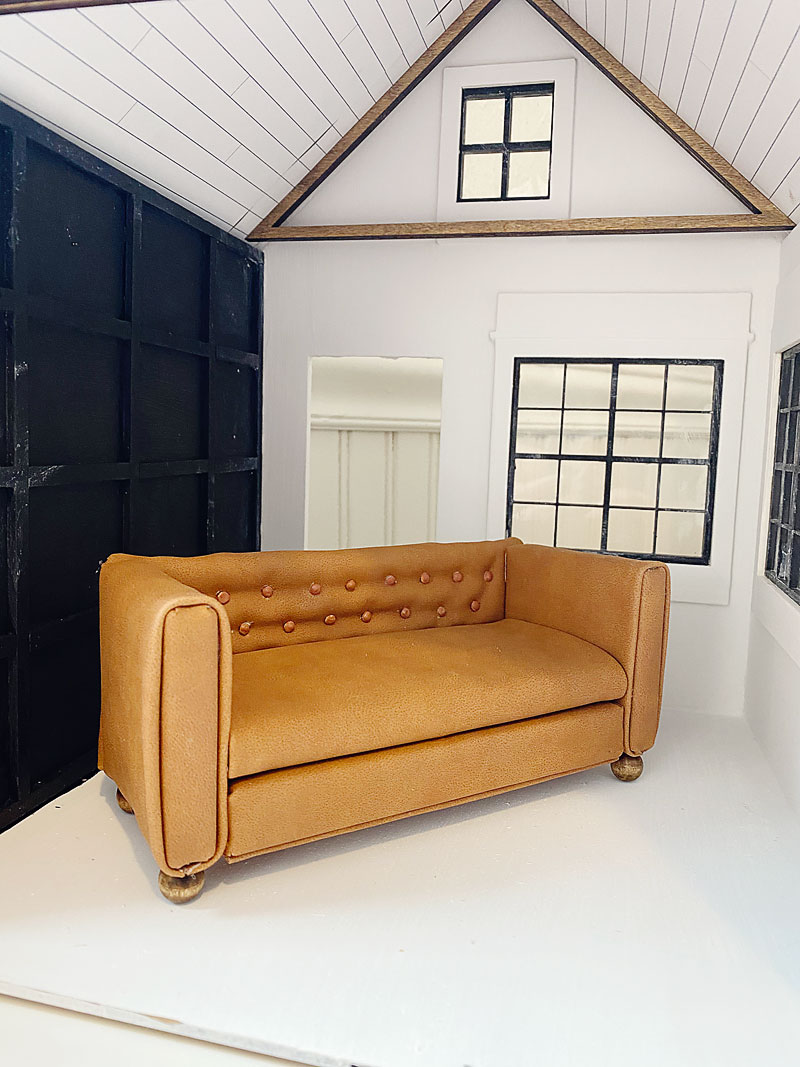 Overall I think it’s okay. If I had used fabric the bulk would not have been an issue. Would love some tutorials on using faux leather from other dollhouse miniaturists!

Tomorrow is Sunday and since we’re getting a major spring snowstorm here in Denver, I will finish the door, roof, floor and clean up paint on the walls and windows. I’m so ambitious! HAHA

This site uses Akismet to reduce spam. Learn how your comment data is processed. 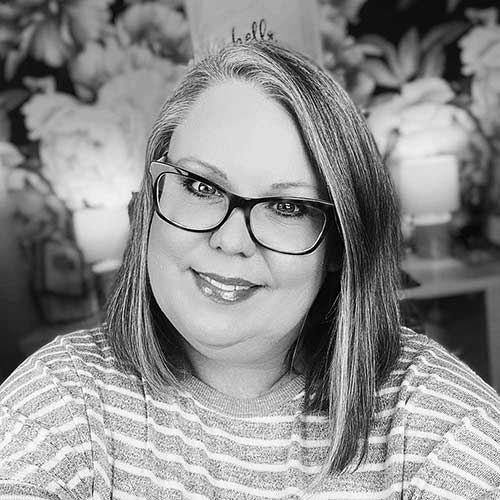 It’s so lovely to meet you and share my miniature world with you.